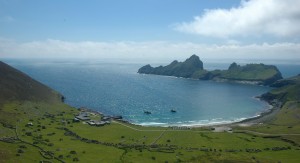 Approximately 45 miles west of the Outer Hebrides, St Kilda was once home to Britain’s most isolated community. We have a very high success rate in reaching, and landing guests upon, St Kilda. The history of St Kilda, its remoteness and amazing wildlife make the islands an exceptionally desirable destination for anyone interested in natural history. Please note, however, St Kilda is never a guaranteed destination.

Strangely, there was no Saint Kilda. It is possible that the name evolved from “Skildir,” an old Norse word meaning “shields,” as this could suffice as a visual description of the islands – Hirta, Dun, Soay and Boreray plus sea-stacks such as Stac an Armin and Stac Lee – from a distance. The islands and stacks are probably the remains of an extinct volcano.

The first signs of habitation on Hirta (the largest island in the archipelago and the only one you can really land on) are thought to have occurred c. 600 AD. The islanders’ harsh and often tragic life is recorded in books up to the point of their evacuation in August 1930. Upon his death in August 1956 the Marquis of Bute bequeathed St Kilda to the National Trust for Scotland (NTS). They accepted the task in 1957, the same year that the RAF began work on a tracking station on Hirta. The following year the Royal Artillery moved in and a radar station was established. The Forces moved out in 1998 but their former presence is clearly visible in the buildings which remain.

As remote as St Kilda is, with National Trust volunteers and a surprising number of passing boats, these tiny islands play host to sometimes one hundred people on any one day. If you’d like to be one of them click here to check availability of our cruises including those to St Kilda.

What our customers say

I loved Canna. Thanks to Mark for taking us on that lovely walk to look for eagles and otters.

Our primary vessel Hjalmar Bjørge is a 23m ex-Norwegian ice-class rescue vessel was purchased by us in 2002.