North Rona lies about 44 miles north from the Butt of Lewis. It is incredibly isolated and landing there is only possible in excellent conditions. Remains of ancient dwellings exist on the island (it was inhabited by a small number of people, on and off, until 1885) and you won’t fail to be impressed by its remoteness, windswept beauty and array of seabirds.

North Rona along with Sula Sgeir, ten miles to the west, was declared a National Nature Reserve in 1956 because of its importance as a breeding ground for birds such as guillemot, puffin, kittiwake and fulmar. North Rona is also a Special Area of Conservation with the third largest grey seal breeding colony in the UK, that’s 5% of the British annual pup production. Our North Hebridean Explorer cruise visits North Rona. 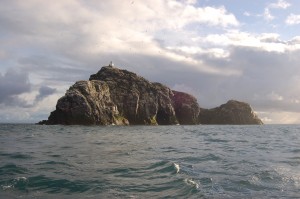 Sula Sgeir (above and right) is one of our more exciting destinations, which we usually include in our North Rona Expeditions. Lying 10 miles to the west of North Rona, this stunning rock outcrop and Gannetry is featured in numerous documentaries about the annual Guga harvest by the Men of Ness. It’s also integral to Peter May‘s superb Lewis Trilogy commencing with The Black House (The Lewisman and the Chessmen), a favourite read aboard!